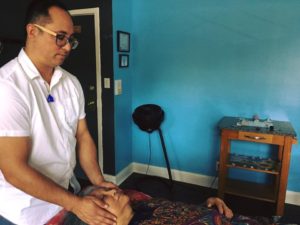 I have been asked this question for many decades.  Maybe it’s because I have that Asian look and its assumed that I migrated from another country. I’m an American and Veteran of the United States Navy. I’m actually from here, the USA, and have spent most of my life in Chicago in the Lakeview Neighborhood.

I was born in Loma Linda, California and moved to Chicago when I was 4 or 5 years old.  I grew up in a highrise on Lakeshore Drive and for a brief period, I lived in Uptown on Winthrop between Lawrence and Leland (5th through 9th grade).  We had a large house that we needed as my sister was in a band, and you can’t have that in a highrise. After ninth grade I moved back to the condo on Lakeshore Drive.   When high school was over, I enlisted in the US Navy and lived on a ship (USS Shreveport LPD-12) in Norfolk Virginia.  After the Navy, I moved back to Chicago.

My mother is from a small Island in the Pacific Ocean called Guam.  Guam is a US Territory and America’s Day begins in Guam. Both of my mom’s parents and grandparents were from Guam.  This is where that Asian look comes from. Guam is a mix of the native people called Chamorros, Philippians, and Spanish when Spain ruled the Island.  For many years I denied being Chinese but recently found out that my great great, great, great grandmother was from Shangha,i China.

My father is from Indiana and grew up on a farm.  His Father and grandfather were also Farmers.  Many Generations ago in the 1700’s my fathers’ side was from Germany and my Grandmother side was France.  Both families immigrated to the United States and became farmers.  So, both my grandparents grew up on farms in Indiana.